Waking in the dark, disorientated after a deep, exhausted sleep of wild dreams, it seems crazy but it's time to get up. Caz unzips the tent fly to reveal a starlit sky, a thin sliver of moon hangs precariously in the west. I fumble for my head torch then reluctantly shimmy out of the warm sleeping bag and drag on extra layers of clothing. There is no frost on the ground but a southerly breeze feels like ice and before long my fingers are aching with cold as I prepare tea and coffee.

A few early rising honeyeaters and kookaburras are making a racket in the treeline below as we begin gathering up camera gear and binoculars before we set off to catch the sunrise. We slowly pick our way across the top of fissured, deeply eroded rocks, heading for the easternmost summit of Mt Yulladunida. A few grass trees have made their home amongst rocky crevices on the mountainside and as morning light slowly increases I catch them out of the corner of my eye, thinking they are people standing erect and silhouetted against the dawn sky. 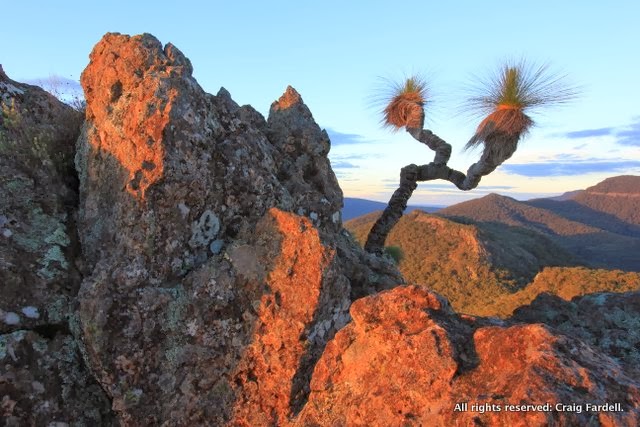 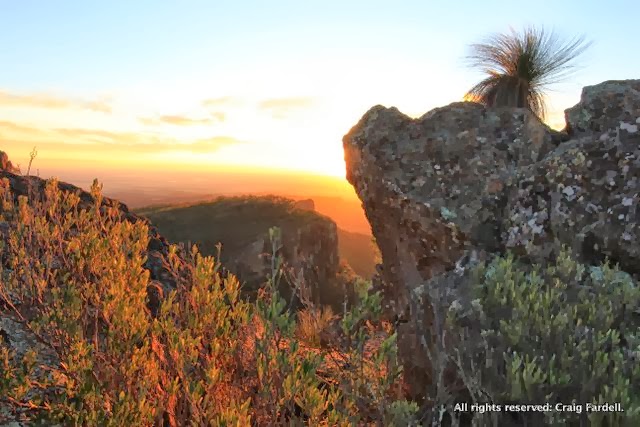 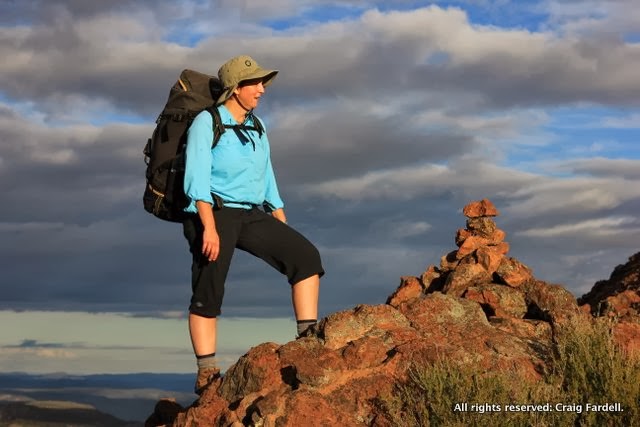 To the north-west, the lights of Narrabri, 40km away on the open plains below, slowly disappear as the sun begins its takeover. Caz is busy, making the most of the  small window of opportunity when light is soft and warm and produces the best photographs. I sit and watch the landscape paint itself in: blue forest in the gullies, orange highlights on rough-barked mountain gums and stringybarks, distant patchwork fields quilted in yellow, green and black. I have all the time in the world (to watch, observe, listen, note the breeze, feel the warmth of the early sun) because we have chosen to travel slowly this time with two days to complete what would usually be an easy day walk. 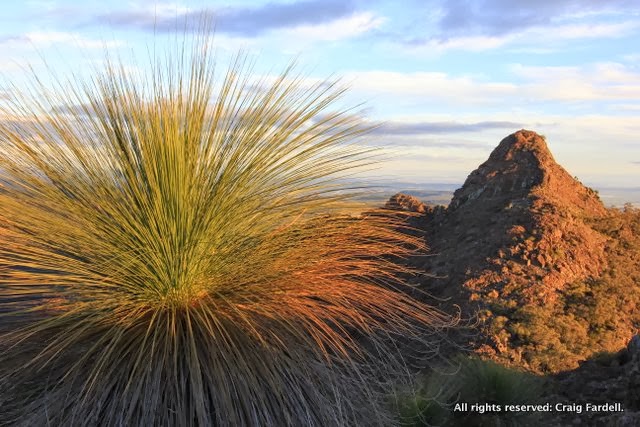 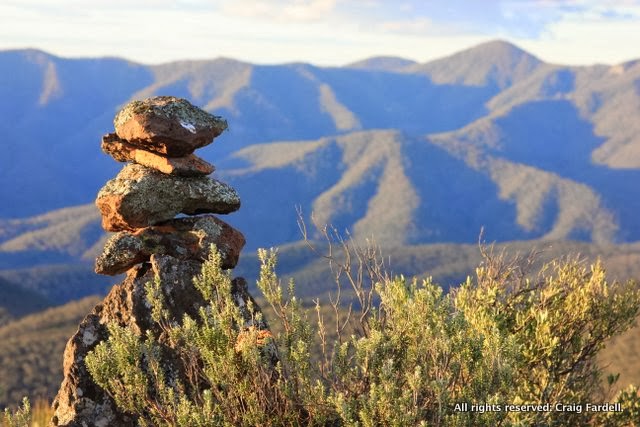 
Mount Yulladunida is in Mount Kaputar National Park, which is near Narrabri on the edge of the NSW North-West slopes. The mountain is also known as Yulladunida Crater due to its remarkable shape. It is accessed via a 2km walking track from Green Camp carpark. The track climbs steeply through woodland to the base of the crater and from the end of the path the trees gives way to bare, open rock all the way to Mt Yulladunida's east and west summits (elevation 1225m).

After sunrise on the east summit we spent the morning climbing along the spine of the western half of the mountain, heading up and down and up and up and down it's tortured humps. Amongst the rocks we found pretty droplet flowers of the rare, endemic Green Phebalium (leionema viridiflorum) found only amongst the rocky peaks of Kaputar National Park and the nearby Warrumbungles to the south. 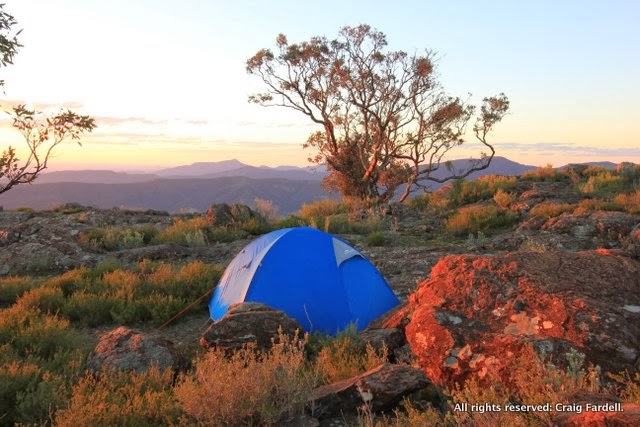 After lunch, we returned to the saddle between Yulladunida's two main peaks and struck off in a westerly direction, through thick, low growing forest, stepping over the pitiful remains of the crazy dingo fence that once cut its way across the heights of the mountain. We veered right and followed the edge of the north-eastern cliff line until we were forced up and over a small rise and down the other side onto two large barren grounds of open heath and rocks. Here we camped for our second night and spent the afternoon exploring the flat plateaus, watching peregrine falcons and white eared honeyeaters, between long moments spent looking across to the impressive rocky tooth of Mt Ningadhun.

In the morning, we dropped into a steep and overgrown gully at the south western end of the larger barren ground. The gully brought us out underneath the plateau's cliffs and we followed the base of them closely as they lead us around to a forested saddle between the Mt Yulladunida plateau and Mt Ningadhun.  From this saddle we weaved our way down the steep, dry hillside and emerged onto the main road into the park. It was about 1.5km back up the road to the Green Camp carpark. The undergrowth was thick with the pretty purple peas of flowering hovea.

the way to travel


This loop is only a short day walk but it took us two nights and nearly two days. Travelling so slowly was an exquisite experience. With so much time, we set up camp early and each site began to feel like a home. We discovered a best spot to sit for the view and out of the wind. On the second night, over behind the tent was a narrow gully which was home to a small family of honeyeaters and they were inquisitive when I dropped down into their scrubby forest and sat quietly to listen and watch.

For a poetic rendering of this thinking and the revelations that come with bushwalking read Mark Tredinnick: "Prepare for the walk by taking the walk. Go a little faster than you should and a little slower than you'd like". http://www.marktredinnick.com.au/index.php/writing/more/rules_for_walking/. 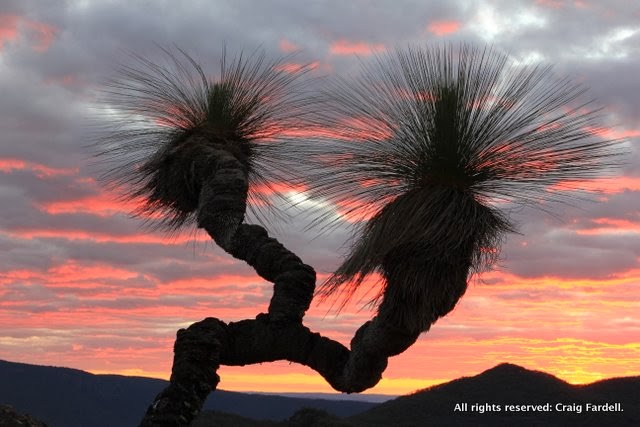 Posted by awildland at Saturday, November 09, 2013