An erratic frontal wind hit us hard, stripping loose leaves from the forest canopy and throwing them about like confetti. The weak light in the rainforest dimmed to almost darkness – it was only 3.30pm. I walked in circles at a manic pace thinking we might have time to pitch the tent before the storm hit. But, it was far too late. The noise in the treetops left no doubt that we were going to get caught out. Around us we could make out the black sillohuettes of gnarled beech trees: a fine grey mist drifted through first and then thunderous white streaks of rain began hammering down. Within 3 minutes every single thing was totally saturated. We huddled together, rain jackets on, packs at our feet, and a one metre square piece of tarp over our heads, water pouring off it so fast we could have filled our drink bottles in a second. The forest canopy swayed wildly above our heads and leaf litter washed away in rafts on the slope around us, exposing the rainforest topsoil and tree roots at our feet. It was a rude interruption to what had otherwise proven to be an idyllic weekend adventure. 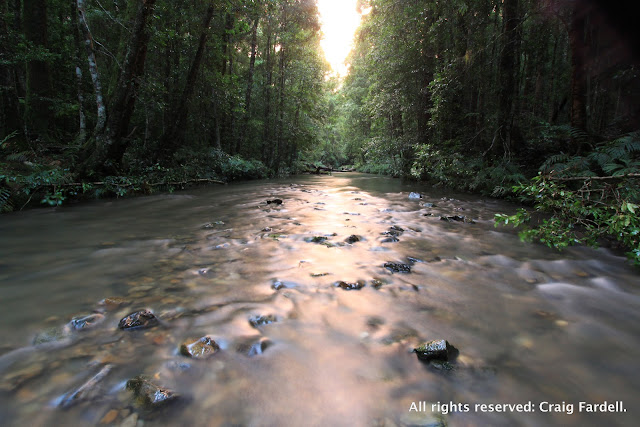 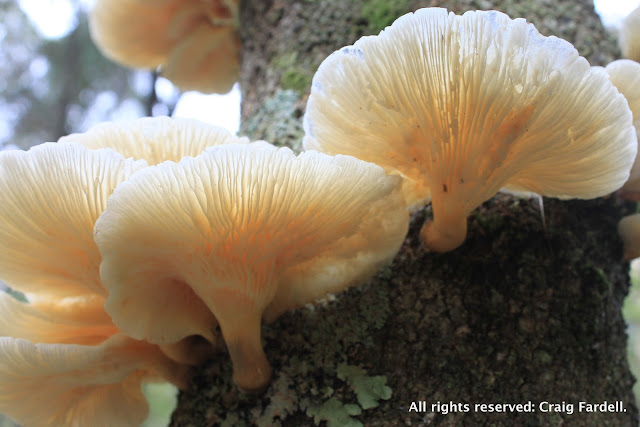 Earlier in the day we had walked along Slingsby’s Trail in Dorrigo National Park before turning off and following old, half overgrown snig tracks out to Dibbs Head where we partook of a quiet, peaceful lunch atop a small band of rock on the southern flank, enjoying the view across to McGrath’s Hump, Rosewood River valley and Dorrigo Plateau. Although the original plan for our weekend rainforest adventure had been to camp somewhere on Dibbs Head, it felt too early in the day to stop and there weren’t any inviting campsites around. The ground was surprisingly rocky underneath the tangled vines and shrubbery. We decided to head back the way we came, then veer left for some off-track exploration of the upper reaches of Wild Cattle Creek, hoping we would find a more idyllic, comfortable campsite.

Walking back along the old snig track became a relaxing, steady and rhythmic slalom, weaving between saplings and tree ferns disturbed only by the odd lyrebird scratching and the distant call of rainforest pigeons. We passed the upper, southern tributary of Stony Creek and the sound of cascading water nearly tempted us in for a look. We wandered on, aiming for the halfway point between Dibbs Head and Wild Cattle Creek, following the Brooklana 1:25,000 topographical map and Caz’s navigational intuition. At a seemingly random point, we drifted off the snig trail and into the forest for some relatively easy off track walking. 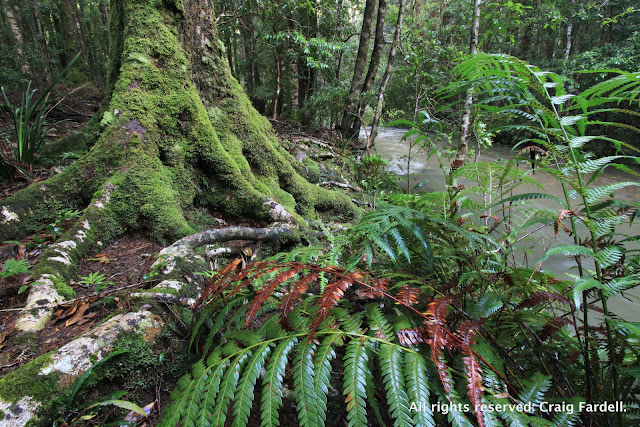 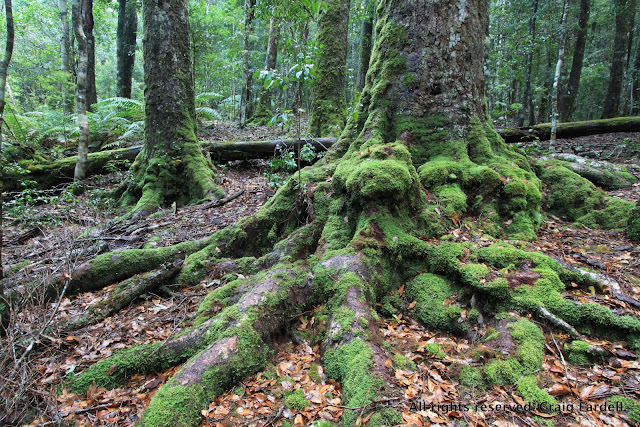 The trees about us were mainly coachwood, sassafras, hoop pine and Antarctic beech with a splashing of understorey plants such as laurels, tree ferns and walking stick palms. A short distance in from the snig we picked up an unnamed tributary of Wild Cattle Creek and followed it as it meandered across the plateau. The creek banks were small at first then rose to 2-3 metres high either side. It looked a little like a natural storm water drain, carved out of the soil and rock; lined with hard water ferms and tree roots. In hindsight, that’s exactly what it was. The afternoon storms on the edge of plateau, we learnt, can be fierce and flooding.

The first indication that a storm was brewing were a few rumbles that seemed safely distant and unthreatening. Even as they began to boom with increasing frequency it was hard to gauge how quickly the storm clouds were building due to the rainforest canopy obscuring our view. But, the dimming light, the eerie calm, followed by those ripping frontal winds gave us a pretty quick understanding of the onslaught to come but the speed with which the storm front was traveling took us completely by surprise. After it hit, the torrential rain lasted less than half an hour and we could see Wild Cattle Creek rising from the sheer volume of water scouring down every gully and bank. We were quite safe, although not dry, and at the time didn’t realise how lucky we actually were. Just a few kilometres below us on the coast, Coffs Harbour was being lashed by the full force of the weather. Some residents described it as a mini-cyclone with fierce 34-knot winds, hailstones and flash flooding. I don’t know how much our little tarp would have helped had we not been lucky enough to catch just the edge of the storm cell. 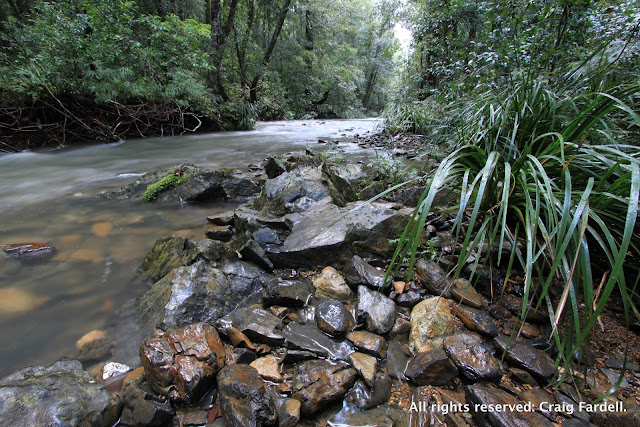 After the wild weather had passed, millions of water drops continued to cascade from the wind-blown trees so it still felt like it was raining. We shouldered our deeply soaked packs and walked off in amazement, water squelching from our shoes with every step. At least the hunt for a campsite took on less urgency now. Even some sunshine began filtering through although, another brief shower kept us from drying out as we continued to push on. 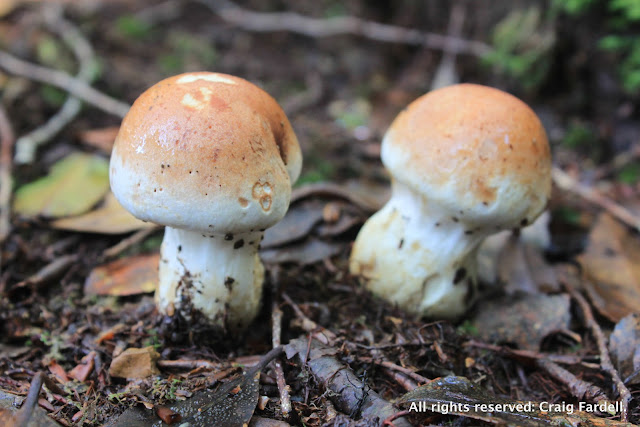 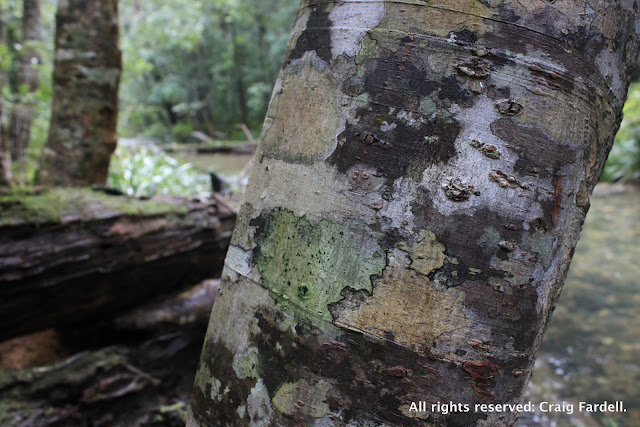 With large Antarctic beech dominating along the creek bed, and barely any understorey to fight through, the walking was such a pleasure. After half an hour or so along the creek we could see some promising flat ground ahead. The area was open with beech trees spread about, vivid green moss carpeting their exposed roots. We pitched the tent beside the creek, which was now running faster and took on a slight smokey look, its rocky bottom still visible and king ferns spread along its bank. Unlike the campsite choices back at Dibbs Head, this pretty camp spot was inviting us to stay for days and days and days. 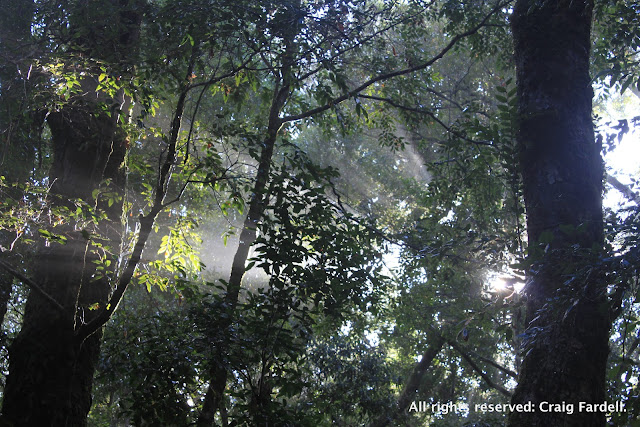 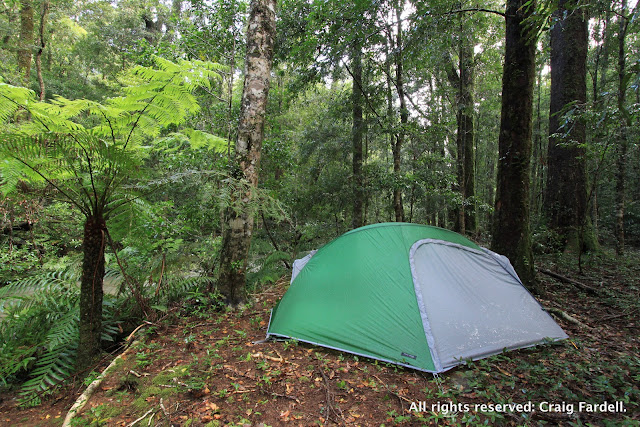 Unfortunately though, this was just an overnight weekend trip. The next morning we continued along Wild Cattle Creek, drifting out of the Antarctic beech rainforest and into the transitional zone of moist eucalypt forest before finally popping out onto the Killungoondie Plain, a natural grassland tucked in the forest of the plateau. Here the slender stems of flowering bladey grass, with its scrappy fairy floss like seed heads, carpeted the scene as we strode across to reconnect with Slingsbys Trail that would take us back to the car. We took a moment on the grassy plain to admire the clear blue sky while we folded away the Brooklana 1:25,000 map, until the next surprise on the next adventure. 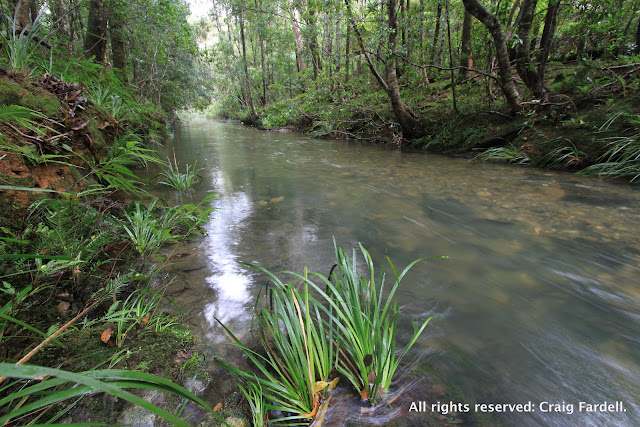 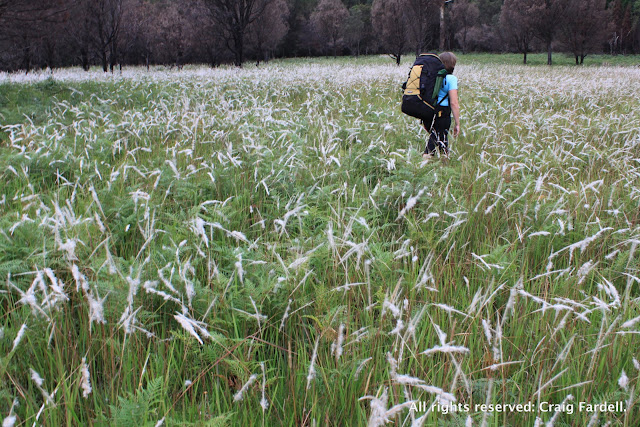