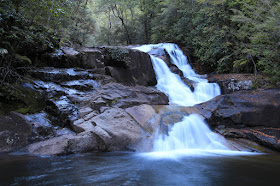 Last month we walked through The Valley of a Thousand Fallen Trees to reach The Ancient Lands of Poa. Magical places high in the mountains, hidden amongst trees of autumn-colour-in-spring and filled with birds born from the blood of lovers.

In less fantastical language, we spent three days struggling up the tree choked and rugged Kerripit River valley in Barrington Tops National Park until we reached the high plateau and collapsed in an exhausted heap on the snow grass, grateful to have finally reached clear open beech forest where new spring growth blushed the forest in autumnal colours and breeding pairs of crimson rosellas roosted in the treetops.

And, while we created mystical names for the landscape, there is a very real mystery hidden in the forests and mountains - Australia's only modern-day unsolved aircraft disappearance. 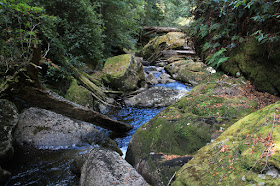 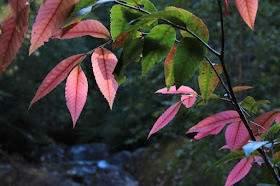 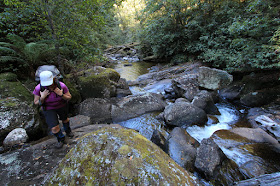 We are not searching for the plane, but its disappearance haunts our journey as we set off along the Gloucester Tops Walking Trail. At our best-guess location, we veer off-track heading for a feeder creek that will guide us to our descent ridge. It arrives sooner than expected and forces us to consult the topographical map – when walking off-track, things rarely arrive early. We make adjustments, accept our luck, and follow the creek to the escarpment edge then traverse south-west onto the ridge that leads down to the Kerripit.

About halfway down, as the ridgeline narrows, a distinct foot-pad appears. There are obvious signs that several walkers having been through quite recently. It brings the fate of that lost plane to the forefront of our minds. Despite having disappeared more than 30 years ago the search continues to this day. 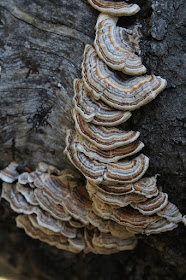 For those who don't know the back story, in 1981 a Cessna 210 with five people on board went missing over the Barrington Tops. The final minutes of radio contact with the plane indicated the pilot had lost his Artificial Horizon and his Gyroscopic Directional Indicator. He was in the clouds, experiencing severe turbulence and rapidly losing altitude due to strong downdraft. The pilot's final transmission was tinged with panic. He knew he was below the safe altitude for that region.  He and his four passengers have never been found.

An extensive search was carried out over the Barrington Tops immediately following the plane's disappearance but since then, there have been new theories, revised ideas of where to search, and now the focus has shifted to an area about 16km east of the traditional and original 1981 search zone - right here on the mountains surrounding the Kerripit River. Just a week or so before our walk we heard news of a volunteer search and rescue squad combining a training weekend with a search for the plane in this formidable forest.

While we don't waste any time on the descent, all up it takes nearly four hours from the car to the river.  It is a tiring walk; uneven, scrappy and rocky. The river is a relief but also a new challenge. The sides are steep and campsites few. After a rest and some lunch we begin scouting around and find that this is pink robin territory; a small male bird, bright chest puffed out, flits in the overhanging trees. We see him once, for a few minutes, and then he is gone. A grey fantail comes in close and scolds us and a thornbill hops along some branches by my right shoulder, cocking his head this way and that, to get a good look at me. I am always suspicious of places that have no birds, so these friendly visitors seem to say this is as good a spot as any for us to set up. In the forest back off the river we finally find a suitable, relatively flat opening.

In the morning we walk downstream. This is actually the reason for our adventure – to take a look at a patch of forest marked on old, old maps as Kerripit Beech Flora Reserve. Hanging from thick mossy branches of the large beech trees are orchids with pretty white flowers. There is a lot of young Prickly Ash and a massive old Turpentine, split and tunneled and cauterized by a lightning strike. Two if its thick branches have been blasted into the river.

As well as Antarctic Beech trees, high on the slope, we find emergent eucalypts – Blue Gums we guess. There are also big corkwoods. It would be nice to explore the reserve more, head higher up the slope, but, after nearly two hours we return to our packs, shoulder their weight and begin our main challenge – The Valley of a Thousand Fallen Trees. 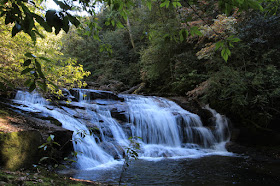 The Kerripit is a wild, tricky river. Rocky hopping is rare. The boulders are angular, wet and slippery.  To avoid walking through the water, we are forced time and time again up onto the steep sides of the valley into scrub threaded with a fine tangle of soft vines. Then there are the thousand fallen trees. Most are huge and prove difficult obstacles to climb over, crawl under or walk up and around. They litter the riverbed and the steep-sided forest.

Just before lunch we reach a bend in the river where it turns from an east-west course to a north-south heading. A steady, boulder choked gradient rises before us and so we head high again onto the side of the ridge. There is a pretty cliff line up high and in the spirit of naming things we call it The Great Wall of Kerripit. It is more than 100m long but only 10m or so high. A tree has fallen off its top edge and ripped a landslip of boulders with it. We scramble over and around the wreckage before finally making it back to the river to rest and eat lunch.

The puzzle continues. All afternoon we solve problems, create new and exciting physical manouevres with the big packs on – crawling, four-limbed walks, swinging off trees, balancing and busting energy. It is not until mid afternoon that we begin to see anything I would call pretty. Always it has been wild, yes, but pretty? 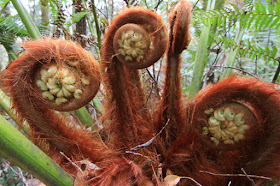 The afternoon brings us to a 15m waterfall. Upstream is another, river-wide cascade. Not long after this is another, longer, prettier, reward. Finally, I think, we are getting something back for our effort.

After spending a few minutes photographing the latest big, sliding, dropping cascade we head upstream to hunt for a campsite. We joke about sleeping on a large square platform of rock that we pass. It is on the bank, uneven and small. As Caz is halfway across the river, ready to continue upstream, I take a backward glance at the ledge. It's not bad from this angle. I call him back. I check my watch. It is 4:30pm. The ledge, at eye level, isn't flat but it's close enough. We call it home for the night.

On day three, I cannot imagine the fate of that lost plane or the passengers in it. We climb up above a 65m long series of smooth, sliding cascades and from an open, rocky edge I have a view back down the steep-sided Kerripit River. It's a wild aspect. How to find a needle in this sort of haystack? The dense forest would easily swallow a hundred such small things. The plane could be anywhere.

I stand mesmerized by the view. I can't hear anything over the roaring water. The cascade ends in a short 10m waterfall. The remoteness and ruggedness of the valley below and the mountains either side  is vision of true wilderness. 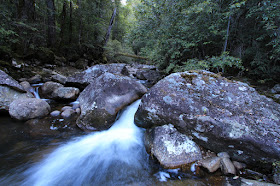 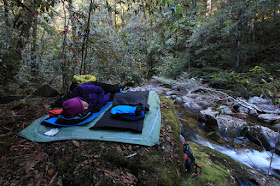 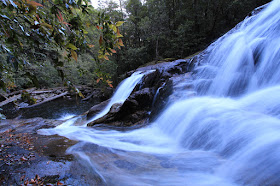 Above this final, splendid cascade it is like stepping over a threshold. There is snow grass on the slopes, the valley opens up and the forest changes to snow gums and banksia. The Kerripit River has narrowed. It burbles and gurgles quietly. Finally we reach beech forest. Campsites are still surprisingly rare but just after lunch we arrive at a large river flat.

It is not far from here up to the Gloucester Tops Walking Trail but with time off work, why rush back. We stop early and spend the afternoon recovering from the previous days efforts. I begin to make notes about the day's walking and I notice my introduction from yesterday – "so much effort for so little reward". I question that bleak outlook now. The pretty waterfalls came late in the day but I am starting to feel the benefits of simply being out. I stand by the more inspired mood I've penned in this blog.

In the morning, the walk up the hill from the Kerripit River back to the Walking Trail is through forest filled with clumps of brilliant red leaves on the dominant understory tree. Hence the reference to the autumn colours in spring. It feels like a typically "down under" thing to do, reverse the season's hues. 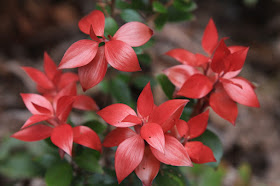 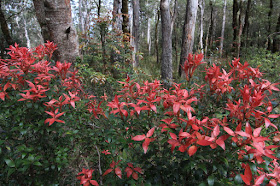 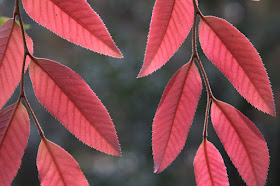 We pop out onto the trail and begin the easy amble back to that car. How a foot search will ever find the missing Cessna is beyond me. The wilderness we have been through and the vast size of this deep stack of mountain ranges presents a staggering challenge. The missing plane could be anywhere. Either side of the trail, we can see no more than a dozen or so metres into the bush. I am reminded of our last blog post about the Barrington Tops and another plane crash, an Airforce Aermacchi, laying just a few hundred metres from the national park's main forest road but not found for eight years.

I admire those that keep searching for the missing Cessna and probably it is similar to what drives us to keep visiting new and challenging off-track terrain. There could be no rewards and only hard walking but there could be something amazing. For the searchers, the Cessna could be anywhere in the Barrington Tops. But of course, what keeps them going, is that it has to be somewhere. 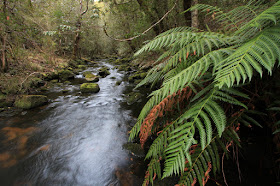 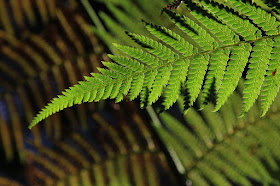 All images and words on this site are copyright of Craig Fardell and Christina Armstrong. It is illegal to sell, copy, or distribute images and text without permission. We thank you for your help in respecting the copyright of our work.
awildland at Thursday, November 17, 2016
Share